War Crimes Of Eisenhower – After WW2 The Real Holocaust!

In March 1933 Judea declared war on Germany. This culminated in genocide – the systematic ethnic cleansing of Germans in post-war Europe, the war crimes of America as stipulated by Dwight Eisenhower. Here in now is the truth about the fate of Germans and Germany under Allied rule after World War Two. The real holocaust.

RH Jason Bartlett, Plus the Second Amendment Under Attack 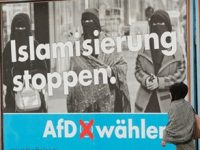