This article originally appeared circa 2009. The author, T Stokes, was deeply informed of many hidden aspects of the power structure and the manipulation of public perceptions through organised deceit. When Cicero wrote of the “Traitor within” he surely had characters such as Churchill in mind.

We tend to think of the truth movement as something modern, but an amazing piece of graffiti discovered only days ago, has shocked historians and truthers alike, and is expected by Churchill memorabilia collectors to fetch a fair price at auction.

The Bishops palace at Ely Cathedral during the recent renovations had some floorboards taken up which were put down during the 1941-42 renovations and excited workmen called the foreman who thankfully, realising the importance of the find, took it straight for safe keeping to management.

The find was authenticated by David and Roger Collier and Jeffrey Solomons, as being the right age the right style and the right black pencil for the early forties, and the fact that as the boards had not been up since that time period, has got collectors excited.

The graffiti shows a wartime soldier turning his back on Churchill while muttering;
” hmmm you warmonger Churchill” and underneath the words ” Drink and Smoke while we die” while over Churchills head are the words; ” You stinkweed churchill you C**t ”

It should be said that “Stinkweed” was the wartime knickname given by Lord Halifax for Churchill who, while drunk, was apt to soil his pants. His secretary John Colville had a special quick release jump suit made like a babies pair of rompers and is on record as saying; “Strange to think a babies jumpsuit may have helped us win the war, by helping our leader not sh*t himself.”

The wartime aeroplane is a well drawn spitfire with RAF markings from the period on the wings, and is shown machine-gunning a mother with 2 small children standing near a German flag, and could be depicting cities like Dresden or Hamburg, where Allied aircraft were told to target civilians and refugees trying to pass through the ruins.

This colossal war crime was hid up at Nuremberg where 1000 bomber raids would come several times a day, not targeting buildings because nothing was left standing, just civilians, women and children, long after Hitler had made many peace offers even sending his deputy Rudolph Hess to negotiate.

The fact that this wartime piece of memorabilia was found in Ely Cathedral is particularly important because, the Fenlands, the agricultural area of East Anglia had all the farmlands. Many poorly paid farm workers were envious of the high standards of living in Hitler’s Germany, even among the Queens estate workers at Sandringham there was an unwillingness to join another Churchill war on fellow Anglo Saxons.

Churchill sent 5th columnists to mix with these land workers and farmhands, and wherever money is offered stories will appear, and because the German bombing in the general Norwich docks area was so accurate, it was said these Norfolk farm hands were signaling to German aircraft with torches, and that tractor wheel ruts in the ground were pointers for German aircraft. So Churchill actually drew up plans to bomb his own people in the Fens area. The full hatred of Churchill is shown in the picture and the star of David emphasises the belief at the time that he was in the pay of the bankers evicted from Germany, and this is partly why with his initials W.C. (W.C. in England stands for Water Closet, another name for toilet or bathroom) he was known as the “shithouse”

Footnote: The Norfolk landowner Sir Andrew Fountaine after the war stood for parliament on a right wing ticket, which would give all his estate workers economic parity with their German counterparts, he won the election but a fraudulent vote count slipped in the Labour candidate by 5 votes.

The famous Churchill impersonator Norman Shelley who actually used to appear as Churchill when he was too drunk to appear in public used to joke; 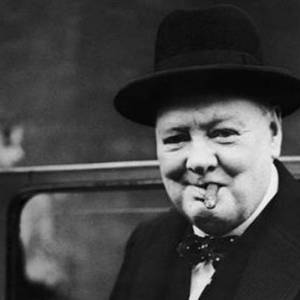 View all posts by Paul English →
« A Picture Paints A Thousand Words . . .
Are Jews Israelites Or Impostors? »