In the second hour of GenZ Truth Ray Zaps Slime Mold, Blackbird9 examined the Post 9-11 Generation Z. From the ancient legends of Great Heroes overcoming Great Hardships, the vulnerability of the most invulnerable systems, the concept of “Maze Brightness” in lab animals who realize they are solving puzzles, the 1971 publication of “Mrs. Frisby and the Rats of NIMH” by Robert C. O’Brien, “House of Stairs” published by William Sleator in 1974, to modern day human trafficking and Pizzagate, the host examined how Generation Z not only became aware of the prison being built around them but learned to study the jailers, wardens, educators, faith leaders, journalists, celebrities, doctors, and financiers involved in this Cultural Marxist New World Order project and began crafting their escape and vengeance. 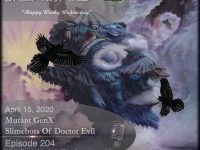