Evidence of Pre-Historic High Civilizations Can No Longer Be Ignored

Adam’s Calendar in Southern Africa, which predates known history by thousands of years.

Evidence of Pre-Historic Gold Mining and Civilization in Southern Africa

Although Nexus still claims that Africa is the cradle of mankind, the reality is that the Annunaki were simply mining gold in Africa.   Given the fact that modern geologists and archaelogists  now admit that there have been many MASS EXTINCTION EVENTS, they still refuse to admit evolutionism is false.

Gap Theory and Genesis 1 explained by Pastors James and Martens 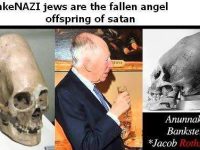 The Annunaki of India: Reptillians of the Very Ancient World

Eli James is the author of The Great Impersonation. Much of his additional writings can be found at the Anglo Saxon Israel website.
View all posts by Eli James →
« VOCI- Pre-Historic Southern Africa, Part 1
Blackbird9 – (177) Gone Fishing Between The Wars Part 1 »