Globalist and Judeo-church traitors that have destroyed South Africa.  Afrikanerbund:

Some facts about the “Evils of Apartheid”: 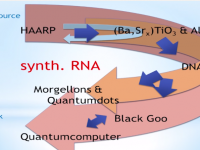 Chemtrails, HAARP and the Weaponization of the Atmosphere

Eli James is the author of The Great Impersonation. Much of his additional writings can be found at the Anglo Saxon Israel website.
View all posts by Eli James →
« Beyond the Rivers of Ethiopia, Part 1
FNN Epstein »