And the thinker who thinks it’s all OK: Peter Singer, bestiality, and infanticide

Marvin Olasky interviewed Princeton philosopher of bioethics, Peter Singer. The New Yorker has called him the most influential philosopher alive. Influence means that one’s ideas have a way of shaping other people’s ideas. So what are Singer’s ideas you ask? When asked about the morality of necrophilia (having sexual relations with a corpse) Singer said, “There’s no moral problem with that.” What about bestiality? Is it morally acceptable to have sex with animals so long as they seem willing to do so? Singer’s answer: “I would ask, ‘What’s holding you back from a more fulfilling relationship?’ (but) it’s not wrong inherently in a moral sense.” Translation: I must say that you’d have to be pretty desperate, but your business is your business.

When asked if it was morally acceptable for parents to conceive and give birth to a child specifically to kill him, take his organs and transplant them into their ill older children Singer answered, “It’s difficult to warm to parents who can take such a detached view, (but) they’re not doing something really wrong in itself.” When asked if there was anything wrong with a society in which children are bred for spare parts on a massive scale he said “No.” I have to wonder why it’s hard to warm to such parents if there is nothing wrong with their choice to treat the unborn as human junk-yards. If their choice to harvest their children for their body parts has no more moral significance than brushing their hair, he should have no problem warming up to them.

He also affirms that it is ethically permissible to kill 1-year-olds with physical or mental disabilities, although ideally the question of infanticide would be “raised as soon as possible after birth.” What’s so scary is that this guy is a bioethicist! You would think a bioethicist would value human life and have some ethics. Not Singer. And he’s not alone. There are other philosophers occupying liberal bioethics chairs in liberal universities that advance similar idea.

If this guy is the most influential philosopher alive, we’ve got serious problems coming our way! What starts in the academy will end up as the common view on the street within 20 or so years. If we don’t do our job as the church today, to combat such moral nonsense with an arsenal of good theology and good reason, we will lose the future generation.

You can read the rest of the interview at Townhall. 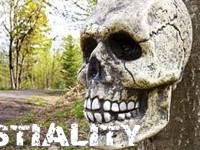 But who will guard the dog? The horrors of modern ‘culture’. . .

« But who will guard the dog? The horrors of modern ‘culture’. . .
Top Russia Scholar Stephen Cohen: War between NATO and Russia a Real Possibility »