In the second hour of Infamous Chicken Swingers History Professors Omit, the dynamics of how “Lying By Omission” effects education. From the reality that any Time model reaching back over 6000 years is technically a violation of Noahide Law, to the dynamics of Homo Sapian and Neanderthal during the last great ice age, the development of Matriarchal Fertility Cult Systems, the jewish obsession with numbers as part of their religion, the BABALON and ABRACADABRA MASTER/slave models retained in jewish literature, the rise of Mosaic/Noahide Law, the eternal struggle between jew and non-jew throughout modern history, the host examined how “Lying By Omission” is one of the most damaging components of GIGO – Garbage In Garbage Out educational programming and how this has been weaponized against the world as a means to achieve the PAXJUDAICA End Game. 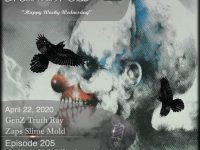