CIA Operative Eric Ciaramella (pictured on the right) is being accused of being the “whistleblower” in the Demoncratic Party’s futile attempt to impeach President Trump.  The brouhaha over Trump’s phone call with Ukraine officials is just a continuation of the nothingburger that was Russiagate.  The Dems have no hope of defeating Trump at the polls without massive vote fraud, so they are doing what progressives always do: concoct accusations and hold show trials.

Leftists have their identities protected by the Deep State.  Patriots get doxxed. 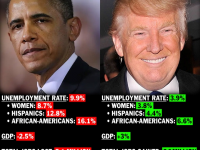 Eli James is the author of The Great Impersonation. Much of his additional writings can be found at the Anglo Saxon Israel website.
View all posts by Eli James →
« VOCI – Tetragrammaton, Pt3
The Rothschilds and the Satanic Seedline »