As we have been telling you at EFR for the last two years, the Trump/Russia collusion accusation is a total fabrication.  It was planned before the 2016 election, as a Plan B to unseat Donald Trump should Hilliar lose the election.  CNN and the other Clintonista networks endlessly reported FAKE NEWS, claiming that Russia colluded with Trump against Hilliar.   Mueller’s Report uncovered zero evidence of collusion.  A good summary here:

It’s time to lock her up.

Guiliani exposes the Russian collusion story as a FAKE INVESTIGATION sponsored by Hilliar Clinton.  Former CIA Director John Brennan initiated this massive hoax on behalf of Hilliar.  This is the biggest NOTHINGBURGER in the history of fake news.

Tell everyone you know about EFR.  Our news coverage is the BEST on planet earth. 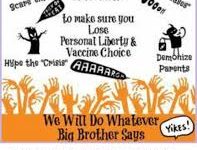 RH – Plandemic Update: the Latest About the Fakedemic

Eli James is the author of The Great Impersonation. Much of his additional writings can be found at the Anglo Saxon Israel website.
View all posts by Eli James →
« RH-190323-Mormons-Satanism-Uranium One- and Ancient Artifacts- With- True Ott
The Great Replacement Must Be Censored »