William Greer, the assassin who murdered Kennedy on behalf of ZOG.

As I have been teaching for twenty years, William Greer, the driver of the Presidential limousine, fired the flechette that killed Kennedy.   I believe it was an explosive projectile because of the damage done to Kennedy’s head.  A flechette fires a variety of projectiles with compressed air, thus leaving no puff of smoke.  It can fire ice bullets filled with poison, darts, whatever will fit in the chamber.

The truth is finally out.

United States Secret Service Agent William Greer ( 1909 – 1985 ) murdered President John Fitzgerald Kennedy on November 22, 1963 in Dallas, Texas’ Dealey Plaza while working under orders from the Rockefeller cabal which engineered America’s first coup d’état.
The evidence has been hiding in plain sight though heavily encumbered by faked evidence occluding the testimony of the physical evidence. One of our correspondents, Michael Gordon, an inveterate researcher into the Kennedy case, has uncovered a book published in 2010, Murder From Within, which lays out the case against Greer.
The book was originally published by Fred Newcomb and Perry Adams, who were also its authors, when they found that the state controlled media would not handle their explosive book. You can tell a million lies without notice, but don’t ever get caught telling the truth.
The story relies upon 8 years of research by the men beginning in 1966 when Edward J Epstein’s article questioning the fraudulent Warren Commission Report provoked Newcomb, a professional photographic expert, to dig deeply into the case.
Their results are astonishing with Dealey Plaza being one, but not the only, focal point of the action. The drama began with a stray shot fired from one of the many shooters and assassins ringing the Plaza, a signal to open fire. The second shot came from behind the fence on the grassy knoll which hit Kennedy in the throat. Jackie Kennedy looked to her husband to ask what was wrong as the President clutched his throat.
At about the same time, John Connally (1917-1993), sitting by the limousine’s right window behind Secret Service agent Roy Kellerman, turned to his right to watch the president, most likely because he wanted to witness the President’s death. At the moment Connally was facing the President, Jackie abruptly stared at Connally for an extended period. The reason for this strange attention to the Texas Governor was because he was reacting – and quite verbally we imagine – to a point blank gun shot fired straight at his back. Two other stray shots from the Dal-Tex building hit the limousine windshield and windshield frame.
When Greer, the President’s Secret Service driver, realized that the President was not dead, he used his pistol [correction: flechette – EFR] to murder Kennedy point blank from the front at which point Jackie panicked and attempted to escape the murder mobile only to be rebuffed by Clint Hill shoving her back into the limousine. At least two more stray rifle shots were fired. Greer suddenly accelerated to Parkland Memorial Hospital where they press the doctors quickly for a death certificate in order to swear-in Johnson as president.
Meanwhile, the bubble top of the limousine is installed so that Secret Service agents can immediately wash down the interior of the vehicle to scrub it for any evidence.
At Parkland Secret Service agents secured every phone in order to prevent anyone from calling out to report news. The Secret Service also commandeered the body in order to whisk it back to Washington for a fake autopsy and removal of any forensic evidence showing a frontal head wound.
While at the hospital, the Secret Service also spread the rumor that an agent has been shot so that it could assert federal jurisdiction over the entire Dallas area in order to claim the slain president’s body. Under Texas law, any murder on Texas soil is strictly the jurisdiction of the state. Secret Service agents threatened reluctant doctors with murder to relinquish the body, thus concluding the coup.
Much of this narrative contradicts in key places points we have made previously. Although we have long advocated a frontal shot, we had assumed that it took place by a trained sniper near the Stemmons underpass. Even with high powered scopes, this maneuver is difficult against a moving target, one reason why Greer stopped the president’s vehicle. However, when the other assassins failed in their attempts, Greer had to stop the vehicle to murder the president.
When we reported earlier the overwhelming evidence supporting an altered Zapruder film, we thought the reason was to obscure the frontal assault. While the CIA was only partially successful in that task, the main reason for the alteration was to remove evidence of a stopped vehicle, and to omit any evidence of Greer’s treason by regicide. The Zapruder film sustained serious corruptions, something which the original developers have testified to Douglas Horne.
While the Secret Service was an organic part of the coup, they were still under operational direction from the CIA, which in turn is the operational arm of the Rockefeller Nazi [sic- ZOG Zionist Occupation Government – Eli] syndicate which rules the country through its fabulous wealth.
We were skeptical of Greer’s guilt at first – not because he was not a murderer – but because of the audacity and lack of evidence for such a case. But the surviving evidence shows his body movements to be in concert with the head shot to Kennedy and explains how both Connally and Kennedy were shot at so quickly.
When Connally was in the hospital, he ordered his state security to guard his room and the building and to allow absolutely no Secret Service agents near. When he yelled in the limousine that “they are going to kill both of us,” he knew the plot since he was extremely instrumental in luring Kennedy to Dallas and to the kill zone. Thus we ponder why the revolutionaries wished to murder a co-conspirator.
This explanation of John Kennedy’s death is breath taking, but it fits the most facts. If anyone is still looking at Oswald as the assassin, we invite him to apply for a timeshare in our deluxe bridge stretching from here to Shangri-La. 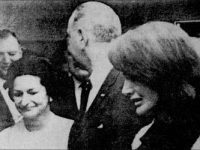 LBJ, the Murdering Mastermind of the Kennedy Assasination

Eli James is the author of The Great Impersonation. Much of his additional writings can be found at the Anglo Saxon Israel website.
View all posts by Eli James →
« Deep State (ZOG) and Pedophiles Being Exposed by Social Media
LBJ, the Murdering Mastermind of the Kennedy Assasination »