Where is Julian Assange?

Has Julian Assange been abducted or killed?

Does anyone know about his whereabouts?

Have you seen this man? He’s wanted for trying to save democracy.

Following the news feels like watching an archery contest. You blink, you miss the shot.

On second thought, keeping up with the news these days is more like trying to keep your eye on ten arrows shot all at once. Wikileaks, Zika virus, Veritas videos, vote-rigging, Black Lives Matter, war with Russia, cyber attacks, Obamacare collapsing on our heads, and on and on.

That’s why we here at the Conservative Daily Post try to find and explain the most important news of the day–especially because you won’t hear about most of it from the mainstream media (aka the Democratic Palace Guard). The problem is, you can’t vet the news unless you report it.

I have written articles before that readers sometimes criticize like this: “That’s just speculation! What are your sources for this? Can you prove it?” Etc. Specifically, for example, earlier this week when I wrote about the apparent death of Julian Assange (founder and head of Wikileaks), we received blowback that his death was “just a rumor.”

When a man threatening the globalist elites with hacked revelations, and who is literally trapped in a foreign embassy that local police suddenly converge on–when a man like Assange goes silent, has his Internet cut off, and his organization’s starts tweeting much more aggressively and negatively, then, yes, there’s a name for rumors like that.

Assange is in London; we are not. All we have to go by are up-to-the-minute reports via on-the-street witnesses and friendly insiders via Twitter, Periscope, Facebook, etc. You can track an arrow in flight, but you can’t guarantee it will hit the bullseye. Likewise, we at CDP track the news as closely and objectively as possible, but that doesn’t guarantee the information we pass on to you always pans out.

So, because this is a high-stakes, international, complex, and still breaking story, let’s break it down piece by piece, arrow by arrow. 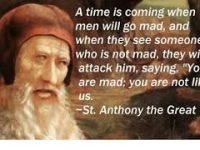 Hillary Clinton, Libya, and the Flood of Immigrants Into Europe

Eli James is the author of The Great Impersonation. Much of his additional writings can be found at the Anglo Saxon Israel website.
View all posts by Eli James →
« Jews Subvert America Through Sexual Exploitation
YCP-161230-Second-Death-Meaning-Of »