The last enemy that shall be destroyed is death.

When Malcolm, in order to test Macduff, makes up a false litany of sins that he has committed and will continue to commit should he become king, he asks Macduff at the conclusion of the litany whether “such a one be fit to govern?” Macduff replies, “Fit to govern! No, not to live!” I thought of Macduff’s reply to Malcolm when I received a political pamphlet in the mail that posed the question of whether Hillary Clinton was fit to govern. But that is how far down the slippery slope we have gone. A creature who appears to have crawled out of hell is a candidate for President and will receive millions of votes. But white Americans are not alone on the slippery slope to hell. Wasn’t Angela Merkel elected Chancellor of Germany, and haven’t most European nations elected similar creatures from hell to high positions in their governments?

It’s not that a vote for Trump is a sign of moral health, because there are many reasons why a man would vote for Trump, and only one is the right reason – that a Trump victory would be a stop-gap measure to prepare whites for the real battle, which is the battle to restore Christian Europe. But the fact that a man does not vote for Hillary is a sign that there is still something to work with within that man’s soul. He has at least rejected the devil-woman, even if he hasn’t become a Christian knight.

I have never been a believer in the ‘wake-up’ theory or the ‘pendulum’ theory of history. The ‘wake-up’  theorists say that a Hillary victory will be beneficial because it will ‘wake up’ white Americans. And the ‘pendulum’ theorists claim that we need not be actors on the historical stage, we need only be spectators who watch while the great historical pendulum swings back and forth from decadence to health, and then back again from health to decadence, all without human or divine action.

I reject the ‘wake-up’ theory because I don’t see how people who did not wake up when miscegenation, abortion, and sodomy were legalized are suddenly going to ‘wake up’ when Hillary is elected President. So in my view the election of the devil-woman would be an unmitigated evil while the election of Trump would be a baby step towards His reign of charity. But a Trump victory will not be a swing-back on the historical pendulum. There is no such pendulum. A Trump victory will be a minor victory in the long war with liberalism.

It’s not a coincidence that the countries that embraced the hatred of the white race with the greatest fervor are ruled by women. There is nothing as hellish as a woman possessed by her own will, completely outside the sphere of His divine will. Such a woman (Lady Macbeth is her exemplar) will commit any crime to further her demonic will. Angela Merkel and Hillary Clinton are cut from the same satanic cloth. The destruction of an entire race is nothing to them. They feed off the blood of white people; it sustains them as a narcotic sustains a drug addict.

All liberals are desperately trying to return to paganism, but the female of the species is made with moral blinders; she can see only one side of an issue, and if she has lost sight of the good, she will pursue her evil ends without mercy for her foe or any doubt about the righteousness of her cause. The post-Christian female hates the people who foisted a ‘false, oppressive religion’ on her, and she is determined to rid the earth of that abominable race.

The old Greek fable about a man’s flight from death is apropos as regards the dilemma of the modern European. I first read the fable in a novel by Thomas Mann: a servant of an Athenian nobleman, while shopping in the market place for his master, sees Death, and Death makes what the servant thinks is a threatening glance at him. The servant runs back to his master’s house and starts to pack his bags.

“Where are you going?” his master asks.

“Because I saw Death in the market place, and he cast a threatening look in my direction.”

So the servant flees to Crete while his master goes to the market place to look for Death. He finds him.

“Why did you look at my servant with a threatening glance?”

“That was not a threatening look, it was a look of surprise. You see, this very day I have an appointment with him in Crete.”

Life is tragic, because we are mortal men who must die. The pagans dealt with the tragedy of existence in one of two ways – either they turned to sex and blood cults, in which they kept death at bay by losing their consciousness of death in the ecstatic moment, or they sought to escape the tragedy of life by way of the philosophical abstraction. If your mind can abstract itself from the body, then it can achieve a kind of immortality of the ‘universal mind.’

And then Christ, the protagonist in the life and death drama of man vs. death, entered the picture. Christ presented man with a third option: instead of fleeing from the tragedy of life, he could look that tragedy in the face and he could triumph over death through the cross of Christ. If we go deep, if we bestir our European blood, we can still feel as our European ancestors felt when they looked at existence in and through the blood of our Savior, Jesus Christ.

For a man to actually know, in his blood, that Christ has the power to raise us from the dead is a knowledge greater than all the scientific knowledge and all the wealth of this world:

And when he thus had spoken, he cried with a loud voice, Lazarus, come forth. And he that was dead came forth, bound hand and foot with graveclothes: and his face was bound about with a napkin. Jesus saith unto them, Loose him, and let him go.

And then the Evangelist tells us that many believed after they saw Lazarus rise from the dead, but many also went and told the Pharisees what Christ had done. It staggers the imagination. They saw Christ restore life to a dead man and their only concern was to get brownie points for squealing to the Pharisees. And what was the Pharisees’ reaction? Did they say, “Wow, we must have been mistaken about this fellow — if He can raise the dead He just might be the son of God.” No, instead they sought to destroy him, because he threatened their power:

Then the chief priests and the Pharisees called a meeting of the Sanhedrin.

“What are we accomplishing?” they asked. “Here is this man performing many signs. If we let him go on like this, everyone will believe in him, and then the Romans will come and take away both our temple and our nation.”

Then one of them, named Caiaphas, who was high priest that year, spoke up, “You know nothing at all! You do not realize that it is better for you that one man die for the people than that the whole nation perish.”

He did not say this on his own, but as high priest that year he prophesied that Jesus would die for the Jewish nation, and not only for that nation but also for the scattered children of God, to bring them together and make them one. So from that day on they plotted to take his life.

Hasn’t Christ’s conflict with the Pharisees become our conflict? The European people saw with their hearts and believed in Christ. From that day forth throughout all their history as the people of God, their battle has been against the forces of unbelief from without, the colored barbarians, and the forces of unbelief from within, the Pharisees of intellectual Christianity, liberalism, and Judaism. Once the Pharisaical element from within became predominant over the Europeans with hearts of flesh, the flood gates that kept the colored barbarians out were opened by the Pharisaical rulers of the white nations.

The Pharisees of the West, having rejected Christ, must return to the pagan escapes from existence. Through the colored hordes they have returned to the sex and blood cults of the non-Christian faiths, and through philosophical abstraction they have returned to the universal mind of the pagan philosophers. All this is because they do not believe that Christ is risen. But St. Paul got it right. If Christ be not risen, we are of all men most to be pitied, for neither sex and blood cults nor philosophical speculation can save us from death.

Liberalism is based on the proposition that the European people can avoid the tragedy of life by fleeing to a utopian island of Crete where a horde of colored noble savages dwell with liberals who are their enlightened benefactors. If a European of the old stock rises up and demands that we should remain in the market place and face death, because our Lord has triumphed over death, that same European becomes an anathema and is purged from Liberaldom. He shall not be allowed to enter into the liberals’ Cretan paradise.

One thing is needful, that we cling to the European line of resistance to liberalism. It is through the European hearth fire that we come to know the God who raised Lazarus from the dead and who will raise us from the dead. The liberals will always attack any European who actually believes he has a people whom he should love above all other peoples. And the liberals take it one step further: They will attack any white man who does not hate white people. That is the real reason, the only reason, that Trump has earned the hatred of the liberals. He has never attacked the colored people, but he has not repudiated white people, and that is what all white people are supposed to do. They must hate themselves.

This is a very important election, because white people need a rearguard to cover their retreat. But win or lose, there is only one course for white people to follow. Our people are being attacked by the combined forces of the liberals and the colored barbarians. At some point we must turn and face them, just as Christ faced death. The Christ-bearing people must be like unto their Lord, and not like unto the servant who fled to Crete. 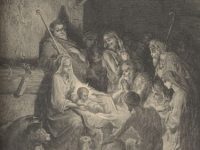