“OUR TRUE IDENTITY IN YAHSHUA THE MESSIAH”

It was brought to my attention, that I should spend some time prior to this sermon on the basic terminology of those that follow the TRUE BIBLICAL Dual Seedline Christian Identity theological teachings. (http://divine-truth.org/wp-content/uploads/2015/12/TWO-SEEDLINE-RACIAL-IMPERATIVE.pdf) I know that most of you listening or reading this are well aware of those terms and meanings, but for those that are just now being AWAKENED to His true message, it should be of paramount importance in our duties as Pastors and Congregation Elders to teach those who have had a TRUE re-awakening to His message and teach them properly. So I will spend some time on the terminology, what we use compared to what the jewdeo-Christians use. Why we use them and what basis we use them on. So I ask that those who are already awake to spend time in thought and prayer, as I bring the newly awakened up to date on the TRUE BIBLICAL CHRISTIAN IDENTITY MESSAGE! The following is the list of some of the terminology that we as Christian Identists use over the jewdeo-Christians: Yahweh, Yahshua, Septuagint, Apocrypha, Israelite, jew (see The jews an introduction; http://divine-truth.org/wp-content/uploads/2015/12/THE-JEWS.pdf ) and Gentile. The last two are talked about in this sermon later and as such will not be talked about here and now.

YAHWEH; God; The tetragrammaton (from Greek Τετραγράμματον, meaning “[consisting of] four letters”, is the Hebrew theonym יהוה, commonly transliterated into Latin letters as YHWH. It is one of the names of God used in the Hebrew Bible (Yahweh has only ONE name, “Call on MY name”, NOT on My names!) True Christianity holds that Yahweh, the god of Abraham, Isaac, and Jacob and the national god of the Israelites, delivered the Israelites from slavery in Egypt, and gave them the Law of Moses at biblical Mount Sinai as described in the Holy Scriptures. Given this we replace “God” with his true name and use YAHWEH, even using His proper name has caused problems within the Christian Identity community, but it is one that can be avoided.

YAHSHUA; Jesus; The Divine Truth Ministries and most other Christian Identity sects believe that the definition of the Messiah’s name can be found in Matthew 1:21: “for he shall save his people from their sins”. The ‘he’ relates to Yahweh, ‘shall save’ can relate to one of the four Hebrew verbs meaning salvation, most likely (-Yahsha) and ‘his people’ means Israel. Here you find an indication of the name Yahshua. Also in scriptures such as Acts 4:12 are found indications that the name of the Messiah was Yahshua meaning “Yah(weh) is salvation”.

SEPTUAGINT; Original Greek Holy Scriptures of the “current New Testament” was used in early TRUE Biblical Christianity and as such was the Holy Scriptures used by the Apostles. The Septuagint (from the Latin septuaginta, “seventy”) is a translation of the Hebrew Bible and some related texts into Koine Greek. As the primary Greek translation of the Old Testament, it is also called the Greek Old Testament. This translation is quoted a number of times in the New Testament, particularly in Pauline epistles, and also by the Apostolic Fathers and later Greek Church Fathers.

APOCRYPHA; Also known as The Lost Books of the Holy Bible, these Holy writs are books that the jews refused to incorporate into the Holy Scriptures, even though they are referenced in SEVERAL BOOKS of the Holy Scriptures. The reason for this is due to the simple fact that they go against everything the jew is trying to do unto the TRUE HOUSE OF ISRAEL THE ARYAN RACE, if placed within the commonly accept Holy Bible the truth would be revealed and they would be and all their “work” removed from history. Apocryphal writings are a class of documents rejected by some as being worthy to properly be called Scripture, though, as with other writings, they may sometimes be referenced for support, such as the Book of Jasher. While writings that are now accepted by Christians as Scripture were recognized as being such by various believers early on, the establishment of a largely settled uniform canon was a process of centuries. They were in the original KJV and were removed in 1825- formerly 80 books – now 66! The Jews favorite number! Roman Emperor Constantine I (some say he was an Edomite) settled the basic cannon in AD 325. At the Council Nicaea – interesting the non-canonical such as Jasher and Enoch were not in “Modern Hebrew” – I smell a rat!

ISRAELITE; In the Hebrew Bible, the term “Israelites” refers to the direct descendants of any of the sons of the patriarch Jacob, or of the people called Israel, and of a worshiper of the God of Israel, Yahweh. In the period of the divided monarchy it referred only to inhabitants of the northern kingdom. As such the Adamic Race of people is known as ISRAEL, as we commonly use today. Side note (The name “Israel” first appears in non-biblical sources c. 1209 BCE, in an inscription of the Egyptian pharaoh Merneptah. The inscription is very brief and says simply: “Israel is laid waste and his seed is not” (see below). The inscription refers to the nation, not to an individual.) Interesting fact that it states …”and his seed is not”.

GENTILE; The term is used by English translators for the Hebrew גוי (goy) and נכרי (nokhri) in the Hebrew Bible and the Greek word ἔθνη (éthnē) in the New Testament. The term “gentiles” is derived from Latin, used for contextual translation, and not an original Hebrew or Greek word from the Bible. The original words goy and ethnos refer to “peoples” or “nations” and is applied to both Israelites and non-Israelites in the Bible. However, in most biblical uses, it denotes nations that are politically distinct from Israel. Since most of the nations at the time of the Bible were “heathens”, goy or gentile became synonymous with heathen, although their literal translation is distinct. The term gentile thus became identical to the later term Ummot ha-olam (nations of the world). Latin and later English translators selectively used the term “gentiles” when the context for the base term “peoples” or “nations” referred to non-Israelite peoples or nations in English translations of the Bible.

Our full and TRUE IDENTITY IN YAHSHUA THE MESSIAH is a very powerful history and an extremely wonderful thing once it has been fully discovered and accepted by the TRUE ISRAELITE and will be even more powerful once the TRUE Israelite people as a collective become racially aware of their history and heritage. Most of those who are Dual Seedline have already made this discovery after years of walking around like zombies with blinders on because we grew up in and accepted the jewdeo teachings of our “Pastors”, and “teachers”. We were taught a false doctrine, as youths, that was created by the devil and those that serve him and his will, a doctrine that lives on within those that call themselves “Yahweh’s Chosen” the venomous jew! Later, in our adulthood, it was emblazoned on our core that the false statements made by these teachers of ours, that the “jews are Elohiym’s (God’s) chosen” and “the Bible is the history of the jews”, and that we as what they refer to as “gentiles” could somehow, through the love of Yahshua be drafted into that chosen (jewish/satanic worshiping) family of Yahweh. 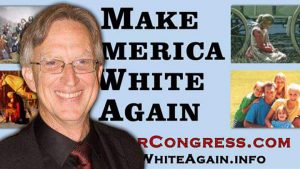