The Israelite Origin of the Caucasian People Confirmed by Archeology

This video provides us with a visit to the migration routes taken by the Israelites from ancient Israel to points all over the globe as predicted the Biblical prophets.   Care must be taken to understand that the Southern House of Judah were never called “Jews.”  That is a modern term applied to the Judeans, who were a multicultural state in the days of Christ.   The proper term is “Judahites.”   The Bible proves that these Judahites were a racially exclusive people, who were forbidden to intermarry outside of their race.  Since the modern Jews are a polyglot of many races, they cannot possibly be the Israelites of the Bible.  The polyglot Jews simply took the name of “Judeans,” which is not the same as “Judah” or “Judahites.”   They were merely residents of Judea, not Judahites of Israel.  These Judeans were of Edomite, not Judahite origin.  This impersonation of Israel by the Edomites was prophesied in Ezek. 35:10-15 and 36:5, backed up by Rev. 2:9, 3:9 and 12:9.

Here is our story:

More about Israel’s passage through the Dariel Pass, still known today by the locals as the “Pass of Israel.”

We the Caucasian people are today engaged in a deadly battle as we have been for many centuries. Once we were the most populous race on the planet, but are now almost at minority status, being only 8% of the world’s population. This trend is continuing apace with the white race having the lowest birth-rate of all the races on earth.

Our enemy the Edomite/Khazars, masquerading as “God’s Chosen” who have stolen our identity have kept us in ignorance of our origin through their absolute control of the media.

It is we, the Caucasians that are true Israel. The name Caucasian gives us a clue, because we came from the Caucasus Mountains through the pass of Israel after escaping from Assyrian captivity. Another clue is that Abraham’s offspring would be named after Isaac from whence we get the word Saxon or Isaac’s sons! Some of these people, in time gone by, were also known as the Goths, which means God’s sons, because the scriptures say we are his children, while the Edomite Jews were referred to by Christ as the children of the devil!

Many of the place names in Europe allude to our Hebrew Identity, such as the Hebridian Islands off Scotland (Isles of the Hebrews) and then we have Iberia, which is now Spain, also means land of the Hebrews, there are many more, but too many to mention in this article.

Our enemy has infiltrated and corrupted the church, just as the Pharisees did in Christ’s time where they teach universalism, even though Christ said, I am not come but to the lost sheep of the House of Israel. They teach that the Commandment, “Thou shalt not commit adultery, means having sexual relations outside of marriage, when it actually means, thou shalt not race mix—the unforgivable sin!

They also teach, that after the flood, everyone is descended from Noah, again not true as Noah’s flood was a large local flood affecting the Adamites. This being punishment for their sin of race mixing, just like what is happening today – the scriptures say that the last days will be as the days of Noah. How true that is, we can see we are in the last days awaiting Yahweh’s (Christ – God) return when he will call upon his angels to bundle up the tares (the Edomite/Khazars) and burn them.

Our Western Israelite nations have already been taken over by the enemy in the name of “Democracy” or “Demonocracy” and we should therefore take heed of our Saviour’s warning for these last days when talking about the destruction of Jerusalem and the last days:–

Luke 22:36: Then said he unto them, but now, he that hath a purse, let him take it, and likewise his scrip (wallet) and he that hath no sword, let him sell his garment, and buy one.

The Migration Chronicles Slide Show, Irrefutable Proof that we Caucasians are Yahweh’s people Israel.  The Germanic word, Goth, means “God’s people.”  The Bible also predicts that Israel will be known by the name of Isaac.  “In Isaac shall thy seed be called.”  Gen. 21:12.

See the whole series at  http://anglo-saxonisrael.com/content/israels-migrations-series 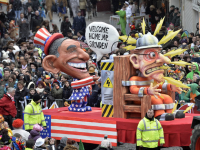 BL – Judaism Is NOT the Religion of Moses

Eli James is the author of The Great Impersonation. Much of his additional writings can be found at the Anglo Saxon Israel website.
View all posts by Eli James →
« This Is The Truth, The Whole Truth, And Nothing But The Truth……
Stupid White People Falling for ISIS Propaganda »