Eurofolkradio presents this video, demonstrating the hypocrisy of forcing the White nations to become multicultural

If the Jews can be pro-Jewish, why can’t Whites be pro-White, especially since it is the Jews who are the modern world’s most powerful colonialists and imperialists, via their global banking system and political clout.  Why don’t the Jews promote multiculturalism in IsraHELL?

“Beware the leaven of the Pharisees (Judaism), which is HYPOCRISY’ – Luke 12:1

Maybe the following quotations will help you WAKE UP to the true nature of Jewish deception:

Universal Jewish Encyclopedia, page 474, “The Jewish religion, as it is today, traces its descent, without a break, through all the centuries, from the Pharisees. The Talmud is the largest and most important single member of that literature; the study of which is essential for a real understanding of Pharisaism.”

From Encyclopedia Judaica – Rabbi Louis Finkelstein was chosen by the Kehilla (Jewish community) as one of the top 120 Jews who best represent “a lamp of Judaism to the world. “ He headed the Jewish Theological Seminary in New York. (One of his star Pupils was former Chief Justice Earl Warren; see Who’s Who in America.

We quote from Finkelstein’s two volume work, “The Pharisees.” “Pharisaism became Talmudism, but the spirit of the ancient Pharisee survives unaltered. When the Jew studies the Talmud, he is actually repeating the arguments used in the Palestinian academies. From Pakistan to Babylonia, from’ Babylonia to North Africa, Italy, Spain, France and Germany; from there to Poland, Russia and eastern Europe generally, ancient Pharisaism has wandered. “

Finkelstein further states “The Talmud derives its authority from the position held by the ancient Pharisaic academies. The teachers of those academies, both of Babylonia and of Palestine, were considered successors of the older Sanhedrin. At the present time, the Jewish people have no living authority comparable in status to the ancient Sanhedrin.  Any decision regarding the Jewish religion must be based on the Talmud as the final resume of the teaching of those authorities when they existed. “

From the New York Herald-Tribune, Nov. 17, 1959, a quote from “The Talmud: Heart’s Blood Of The Jewish Faith” by Herman Wouk, a leading Jewish writer. “The Talmud is to this day the circulating heart’s blood of the Jewish religion. Whatever laws, customs or ceremonies we observe – whether we are Orthodox, Conservative, Reform or merely spasmodic sentimentalists we follow the Talmud. It is our common Law. “

Stephen S. Wise, deceased, and formerly Chief Rabbi of the United States stated, “The return from Babylon and the adoption of the Babylonian Talmud marked the end of Hebrewism and the beginning of Judaism. “

The Babylonian Talmud was originally called “The Tradition of the Elders” (laws of men). The Jews confirm this when talking to Christ in Matthew 15: 2, “Why do thy disciples transgress the tradition of the elders? For they wash not their hands when they eat bread. “ Christ answered in the next verse “Why do ye also transgress the commandment of God by your tradition?” Matthew 15: 9, “But in vain they do worship me, teaching for doctrines the commandments of men. “

Every law in the Bible is diametrically opposed by the Talmud. Every act described as evil and vile is considered good by these Talmudic worshipping Pharisees. The basic belief of the Pharisees and the basic theme of the Talmud are identical, which teaches that ONLY THE JEWS ARE HUMAN and that ALL OTHERS ARE CATTLE TO BE USED AS SLAVES.

To all Whites and Christians, it is imperative that you understand that the Jewish claim to being the Israelites of the Bible is THE MOST GIGANTIC HOAX EVER PERPETRATED UPON A GULLIBLE WORLD.  Nor is Judaism the religion of the Old Testament, as the above quotations prove that Judaism is NOT the religion of Moses.  It is the RELIGION OF THE PHARISEES.   The Bible refers to this religion as THE SYNAGOGUE OF SATAN (Rev. 2:9 and 3:9) and as “the beast that deceiveth the whole world” (Rev. 12:9).   Remember these three verses and confront your deluded “Judeo”-Christian friends with these facts.

– Pastor Eli James, author, The Great Impersonation: How the Anti-Christ Has Deceived the Whole World.  Available at www.anglo-saxonisrael.com 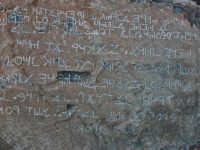 Heiroglyphs Prove that Hebrew Is the Original Language 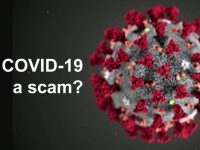 Eli James is the author of The Great Impersonation. Much of his additional writings can be found at the Anglo Saxon Israel website.
View all posts by Eli James →
« Don’t Let Them Take Our Guns Away
Full White Genocide »