Femen, Pussy Riot and the Hypocrites’ War on Christianity

The Wailing Wall is Segregated Between Men and Women

The Jewish Supremacist Hypocrites behind the Radical Feminists “Femen”
From DavidDuke.com
For Human Freedom and Diversity
December 9, 2014 at 9:39 am

A new investigation into the support network behind the radical feminist “Femen” group—which specializes in defiling Christian churches—has revealed that almost all of its major backers, both financially and morally—are Jewish Supremacists.

A Femen protester in La Madeleine Church, Paris. Somehow, this Jewish Supremacist-funded group has never protested in a Synagogue, even though Judaism is openly anti-female…

The revelation that Jewish Supremacists are behind Femen explains why this organization only organizes protests in Christian churches—and never in synagogues. The importance of this is, of course, that Judaism is one of the most extreme anti-female religions to be found.

For example, in all Orthodox Jewish synagogues men pray separately from women and in many women are relegated to an upstairs gallery.

Gender hierarchies are entrenched in Jewish thought: a blessing orthodox Jewish men are required to say everyday thanks a God “who has not made me a woman”.

Women are not permitted to serve as witnesses in an Orthodox Beit Din (rabbinical court), and are excluded from participating in the minyan, the quorum necessary for many prayers, and are forbidden from being called to the reading of the Torah, called aliyot.

In ultra-orthodox dominated areas—in Israel, but also in New York City, Orthodox Jewish men forbid women from sitting anywhere except at the back of buses. This ruling has been upheld by Israeli courts.

Jewish women who have tried to pray alongside Jewish men at the “Wailing Wall” in Jerusalem have been arrested by the Israeli police.

If a feminist group was really looking to claim equality for women, then a Synagogue would be the most logical first target, and not a Christian Church—and particularly not Catholic or Orthodox Christian churches, where none of the above mentioned discriminatory practices are allowed, and a women is one of the most holy and highly prized religious figures.

Femen has become infamous for organizing protests in and against Christian churches in Moscow and continental Europe (one of the more publicized events was when a protestor urinated on the altar at the Paris, France, city center church of La Madeleine, after performing a mock abortion with a calf’s liver).

An article in the Occidental Observer explains further:

So who are Femen and who is paying for them? Who is pulling the strings behind these obscene, marionettes? And why are their offensive actions treated with kid-gloves in a Europe so hyper-vigilant about “hate crimes”? These are among the many questions that surround them.

Femen were launched by a group of Kiev University students campaigning against sex tourism in 2008 and quickly got attention. But as their topless fame grew, the nagging questions increased. How are they able to rent such nice flats in Kiev? How do the girls make a living? The Italian magazine IL Foglio did its own investigation and uncovered some tantalizing facts.

Every activist in Kiev gets about one thousand euros per month, the salary of the leaders is 2,500 euros (note that an average salary in Kiev is about 500 euros). In Europe, spending is even higher, and the girls from FEMEN receive €1,000 a day,” the Italian newspaper wrote. (Aug. 20, 2013)

Il Foglio identified an American Jewish businessman called Jed Sunden as a key funder of Femen. Sunden is an enigma himself because of his puzzling business success. After majoring in history at Macalester College in Minnesota, Sunden ended up working in 1993, “sort of by chance,” on a privately funded research project compiling a register of Jewish cemeteries in Ukraine.

Less than two years later, he decided to set up his own English-language newspaper, the Kiev Post. “I was just a poor kid from Brooklyn with a dime and a dream,” he says of himself at the time. Knowing nothing about the publishing business and having a limited knowledge of journalism, Sunden relied heavily on two experienced Jewish journalists, Igor Greenwald and Brian Bonner.

The dream of an English language newspaper in an emerging former Soviet satellite, has brought many experienced publishers to disaster. But Sunden’s paper not only survived, it thrived. He seemed able to effortlessly summon up advertising from airlines and huge corporations such as Coca Cola and Phillip Morris that eluded much bigger independent English-language circulation papers in Poland, Czech Republic and elsewhere.

[Note from DavidDuke.com staff: The Kiev Post was, without question, the most vitriolic anti-Dr. David Duke organs in the Ukraine when it emerged that he earned his Ph.D. at a university in that country—now the pieces of the jigsaw fall into place!]

Sunden has always refused to say how much he gave to Femen or give precise details why he is doing it. “I confirm that I do give money to Femen,” Sunden said. “I will not state the amount. After meeting with Anna Hutsol, I was impressed with her ideas and have been a supporter. I believe Anna is a young, independent voice in Ukraine. While I do not agree with all of her positions, I believe it is important to give her, and groups like hers, support.”

However he appears to have dropped his support since 2011 when Femen switched its focus from the Catholic Church and began protesting against sexism at the soccer’s Euro cup.

For the Ukrainian authorities the last straw came when a Femen activist sawed down a huge cross in a Kiev park in 2012 in support of the jailed Russian punk rock group Pussy Riot. The cross was a memorial to the victims of the Cheka and NKVD in the thirties and outraged Ukrainians demanded a criminal prosecution.

Finally facing serious criminal charges, the Femen skipped town and set up in Paris where they have plush city center offices and a “training center” for their groups across the world. Who is funding them now is a mystery. They certainly seem to have a sympathetic ear in Paris and applications for welfare benefits were said to be fast tracked.

Femen were inspired by another radical feminist group called Pussy Riot who first came to fame when they desecrated Christ the Savior, Moscow’s largest cathedral, with an obscene punk prayer performance aimed at the Patriarch Kirill and Vladimir Putin.

Like Femen, the key Pussy Riot motivating force seems to be a demented hatred of Christianity in general and the Orthodox Church in particular.

But it was the writer Israel Shamir who first pointed out that Pussy Riot’s prominent supporters from the Russian arts and media are overwhelmingly Jewish.

Pussy Riot’s cause has also been aggressively taken up by a leading anti-Putin opposition group called the Union of Solidarity with Political Prisoners which is led by another two high-profile Jews, Garry Kasparov and Boris Nemtsov.

And yet another Jewish promoter and thought-leader, Alek D. Epstein, has celebrated them in a publication called “Art on the barricades: ‘Pussy Riot’, the ‘Bus Exhibit’ and the protest art-activism.”

“None of them is a practicing Jew,” wrote Shamir “but they apparently inherited their hatred to the Church from their forefathers.”

Russian allegations that both feminist groups are effectively Jewish sock-puppets have been met with the usual spluttering outrage.

Pussy Riot is also supported — in a circuitous route — by the Soros-funded National Endowment for Democracy.

Is it so much of a stretch to view Jewish support of these groups as part of the same agenda?

If Femen has learned anything from Pussy Riot, it is to keep its source of funding hidden. But not all is well with Femen. Recently there has been mutiny in the ranks when Tunisian activist Amina Sboui quit the group after her questions about funding went unanswered. “I don’t know how the movement is financed. I asked … several times, but I didn’t get a clear answer. I don’t want to be in a movement supported by suspect money. What if it is financed by Israel? I want to know.”

Once again, the Jewish Supremacist hypocrisy is on display for the world to see: in all other nations, they support extremist feminism, but in Israel, with the official aid of their state—propped up as it is by US tax dollars—they actively discriminate against women.

It is the old trick of divide and conquer—promote one thing for the Gentiles to get them all fighting against each other, so that they miss the real trouble causers in society—while making sure that the exact opposite policy is enforced in Israel.

For More on related subjects go to: 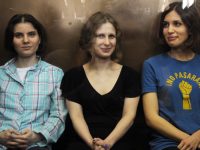 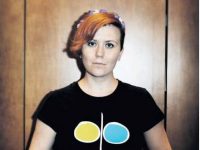 Femen and the Jews